Powered by The Senantix Channels

Wodehouse and Conan Doyle drive through the covers


P.G. Wodehouse and Sir Arthur Conan Doyle did not only share shelf spaces in bookshops, warm cockles of the hearts of the readers and the premises, cover and print spaces of the Strand Magazine - they shared the dressing room at Lords as well.

by Senantix
P.G. Wodehouse and Arthur Conan Doyle did not only share the premises and cover space of the Strand Magazine, but shared the dressing room at Lords as well.

It is not very well known, but both of these supreme scribblers who have delighted readers for more than one hundred years were also very keen cricketers.
In fact, Sir Arthur was a first class cricketer of some ability. Wisden says in his obituary that “while never a famous cricketer, he could hit hard and bowl slows with puzzling flight. For MCC v Cambridgeshire at Lord's, in 1899, he took seven wickets for 61 runs, and on the same ground two years later carried out his bat for 32 against Leicestershire, who had Woodcock, Geeson and King to bowl for them.”
It is of curious interest that his only wicket in first class cricket was of a batsman by the name of W.G. Grace. The creator of Sherlock Holmes got the great man caught by the wicket keeper.
P.G. Wodehouse, although never a first class cricketer, did play with some distinction for Dulwich College. In the first eleven in 1899 and 1900, he once took 7 for 50 against Tonbridge as a fast bowler. His eyesight, though, stood in the way of pursuing greater feats with bat and ball, and hence the typewriter perhaps took over. However, some years later, he took up a position in the Emsworth House School in the Hampshire town of Emsworth, and his main responsibility was to help the boys with cricket. He often turned out for the Emsworth sides, and it is of scarce wonder that one of the most lovable earls of his canon is named after the town.
Wodehouse and Conan Doyle also played cricket for the curiously named Allahakbarries, a team founded by J.M.Barrie, named after the African word meaning ‘Heaven Help Us’ consisting of literary men who played against the various villages in the Home Counties.
PGW later gravitated to golf, his other great passion and the theme for many a book. However, he does recall that the days before all the controversy of broadcasts and internment camp life during second world war he was having a good time playing cricket after many years, confounding batsmen with excellently pitched leg breaks.
The two men were the mainstay of not only the Strand Magazine, but also the cricket teams fielded by the Authors to take on the might of Publishers and Actors. At Lords in 1902, Conan Doyle captained the Authors side against the Publishers, and a twenty one year old P.G. Wodehouse was one of the better players of the wordsmiths.
It is no surprise then, that some of the works of both these men feature the pure English game, and sometimes cricket becomes the main theme in the stories.
Sir Arthur’s collected poems are not as well known as his Sherlock Holmes, Dr. Challenger or Brigadier Gerard stories. However, one of his poems contains a wonderful account of how he got WG caught off his bowling when the ‘wicketkeep’ Storer made sure of a terrific skier from a ball that the Doctor had diagnosed incorrectly. The poem is reproduced in at the end of this article.
Late in his life, Conan Doyle wrote the story of Spedegue’s dropper, published as one of the ‘other stories’ with Maracot Deep. Sepdegue, the hero of the tale, develops an underhand delivery, a lob flung high enough in the air to come down at the pace of a fast bowler. It was like fast bowling delivered from above, attacking the batsman vertically. When he achieved accuracy, Spedegue won a famous Test Match for England against Australia.
Sir Arthur’s other reference to cricket was in one of his Brigadier Gerard stories, where he describes a French officer’s rather calamitous efforts at the game as a prisoner of war.
However, Conan Doyle did have a rather peculiar peeve about left-handers, contending that left-hand batting should not be permitted since it held up the game.
P.G. Wodehouse,during  the beginning of his career when he wrote school stories, did write a full cricket novel, Mike. Mike Jackson, the hero and a friend of his latter day adult protagonist Psmith, hailed from a family of first class cricketers, three cricketing brothers. In the novel, he plays for his school eleven and ultimately scores a century in a first class match.
In Psmith in the City, cricket again features prominently, and Mike’s batsmanship is reinforced by Psmith himself who turns out to be a canny left arm spinner and a tail end batsman who hits the ball with something approaching the tee shots of golf.
In the rather rare editions of P.G. Wodehouse’s poetry one finds his fascination with the game becoming more manifest.
In a small poem titled MCC, he writes:
In speaking of our cricketers,
This maxim guideth me,
If they win a match the’re England,
If they lose they’re MCC.
There are some delightful humorous poems about cricket – The Outcast – A Tale of a Ladies’ Cricket Match, Missed, The Umpire...
However, it is in one quaint little poem entitled The Cricketer in Winter that his affection and romanticism for the game is most apparent.
Things of the past are drive and cut,
With which erstwhile we would astound men;
The gay pavilion’s doors are shut;
The turf is given up to groundsmen;
Gone is the beautiful length ball,

Gone too the batsman who would snick it
Silent his partner’s cheery call.
Football usurps the place of cricket.
...
Or, if in vein for gentle toil,
Before he seeks a well earned pillow,
He takes a flask of linseed oil
And tends his much-enduring willow,
Feeling the while, what time he drops
The luscious fluid by degrees on,
Given half-volleys and long-hops,
How nobly it will drive next season.

It is another remarkable similarity between the two masters that the most celebrated characters created by both had cricketing origins. Sherlock Holmes is supposedly named after two Nottinghamshire cricketers, Sherwin and Shacklock. When Shacklock played for Derbyshire, his fellow fast bowler was William Mycroft, after whom Conan Doyle named the brother of Holmes.
Jeeves originated after the name of Warwickshire county cricketer Percy Jeeves, a fast medium bowler killed in action during the First World War. Wodehouse was enjoying a short holiday in Wensleydale, and happened to come across a cricket match at Hawes where Percy Jeeves was playing and thought the name would be ideal for one of his characters 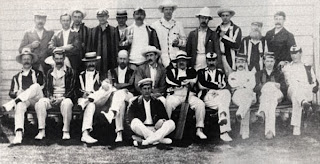 Although we have limited our discussion to two giants who strode the Strand, there have been plenty of other hallowed literary names who have once in a while or often come down and graced the great game with their powerful pens. The names include Lord Byron, Anthony Trollope, Charles Dickens, Thomas Hughes, Rupert Brooke, Robert Graves, Ben Travers, J.M.Barrie, A.A, Milne, Ernest William Hornung (Raffles was a cricketer of repute) and Samuel Beckett (another first class cricketer). E.V. Lucas, Tom Stoppard and Harold Pinter.
However, one exception was Geroge Bernard Shaw who was caught napping to an innocent half volley.
Asked by a reporter in 1908, “Who do you think will win the test?” his reply was, “What are they testing?”
A Reminiscence of Cricket – Sir Arthur Conan Doyle
(an account in verse of how the great writer got the wicket of the great cricketer in a battle of part time doctors)
Once in my heyday of cricket,
One day I shall ever recall!
I captured that glorious wicket,
The greatest, the grandest of all.
Before me he stands like a vision,
Bearded and burly and brown,
A smile of good humoured derision
As he waits for the first to come down.
A statue from Thebes or from Knossos,
A Hercules shrouded in white,
Assyrian bull-like colossus,
He stands in his might.
With the beard of a Goth or a Vandal,
His bat hanging ready and free,
His great hairy hands on the handle,
And his menacing eyes upon me.
And I - I had tricks for the rabbits,
The feeble of mind or eye,
I could see all the duffer's bad habits
And where his ruin might lie.
The capture of such might elate one,
But it seemed like one horrible jest
That I should serve tosh to the great one,
Who had broken the hearts of the best.
Well, here goes! Good Lord, what a rotter!
Such a sitter as never was dreamt;
It was clay in the hands of the potter,
But he tapped it with quiet contempt.
The second was better - a leetle;
It was low, but was nearly long-hop;
As the housemaid comes down on the beetle
So down came the bat with a chop.
He was sizing me up with some wonder,
My broken-kneed action and ways;
I could see the grim menace from under
The striped peak that shaded his gaze.
The third was a gift or it looked it-
A foot off the wicket or so;
His huge figure swooped as he hooked it,
His great body swung to the blow.
Still when my dreams are night-marish,
I picture that terrible smite,
It was meant for a neighboring parish,
Or any place out of sight.
But - yes, there's a but to the story -
The blade swished a trifle too low;
Oh wonder, and vision of glory!
It was up like a shaft from a bow.
Up, up like a towering game bird,
Up, up to a speck in the blue,
And then coming down like the same bird,
Dead straight on the line that it flew.
Good Lord, it was mine! Such a soarer
Would call for a safe pair of hands;
None safer than Derbyshire Storer,
And there, face uplifted, he stands
Wicket keep Storer, the knowing,
Wary and steady of nerve,
Watching it falling and growing
Marking the pace and curve.
I stood with my two eyes fixed on it,
Paralysed, helpless, inert;
There was 'plunk' as the gloves shut upon it,
And he cuddled it up to his shirt.
Out - beyond question or wrangle!
Homeward he lurched to his lunch!
His bat was tucked up at an angle,
His great shoulders curved to a hunch.
Walking he rumbled and grumbled,
Scolding himself and not me;
One glove was off, and he fumbled,
Twisting the other hand free
Did I give Storer the credit
The thanks he so splendidly earned?
It was mere empty talk if I said it,
For Grace had already returned.
-- Sir Arthur Conan Doyle
Posted by Senantix (Arunabha Sengupta) at 9:39 AM

The hunt for Cardus

Why do people criticise Sachin? A cognitive psychologist explains

Arunabha Sengupta (Senantix) is a cricket historian and the chief cricket writer at cricketcountry.com

Senantix (Arunabha Sengupta)
A novelist and cricket historian, Arunabha Sengupta is the author of three novels and the Chief Cricket Writer on cricketcountry.com. In his novels he deals with the contemporary world with acerbic humour. In his cricket writings he covers the history and romance in the game, while his post graduate degree in statistics peeps through in occasional analytical pieces

The Best Seller: Travels and Travails of an author in the Corporate World. Rated 5 stars out of 5 by ForeWord Clarion Reviews